A manufacturing facility uses a large fan as part of its production process. The fan is on 24 hours a day, seven days a week.

As part of their energy efficiency improvements, and inspired after taking part in a PMI Green Belt programme, the factory manager wanted to monitor all key processes in the factory using control charts.

Every 4 months the fan underwent a maintenance inspection and overhaul. On the 15th June, an inspection took place. The fan was checked, serviced and then put back into operation.

After a few days, the energy manager observed that all the points on the control chart were above the mean. With the chart showing 2 points outside the upper control limit, indicating something unusual was going on, they decided to keep a closer eye on the fans’ energy consumption.

On the 22nd June, after 8 days, there were 8 points above the mean, thus Western electric rule #4 was satisfied, and assignable cause variation was highlighted. 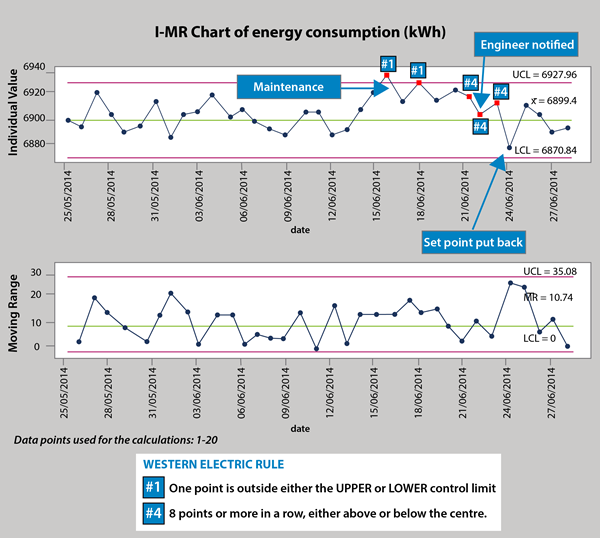 The energy manager immediately contacted the maintenance engineer and told them about this unusual behaviour.

An assignable cause is revealed

On the 24th June, the engineer returned and checked what they had done only to discover they had neglected to reset the set point in the software that operated the fan from maintenance, to operating conditions.

Once the set point was corrected the energy manager continued to monitor the fans’ energy consumption and was happy to note that the performance went back to the standard operation conditions.

If, as in the past, when the daily energy consumption was not being monitored, the errors would only have been revealed during the next set maintenance session, in 4 months’ time. That delay would have meant incurring costs of €15,000 in additional energy consumed.

Both the energy and factory manager were both convinced that the daily effort required of putting a single dot on a piece of graph paper had saved them €15,000!