Establishing and Maintaining a Centre of Excellence

One of the UK’s largest food retail, wholesale, and distribution businesses worked with us to transform their wholesale distribution depot into a Centre of Excellence.

This 80,000m² logistics facility and retail warehouse has 2 core processes, ‘receive, store and replenish stock’, and ‘pick and despatch orders’.

It’s a busy unit with an experienced team under significant time, resource, and financial pressures to deliver a high quality service for their internal and external retail customers.

Their primary focus is to make sure stock gets in and out of the warehouse, but there are significant upstream issues impacting on the team’s ability to deliver a quality service. 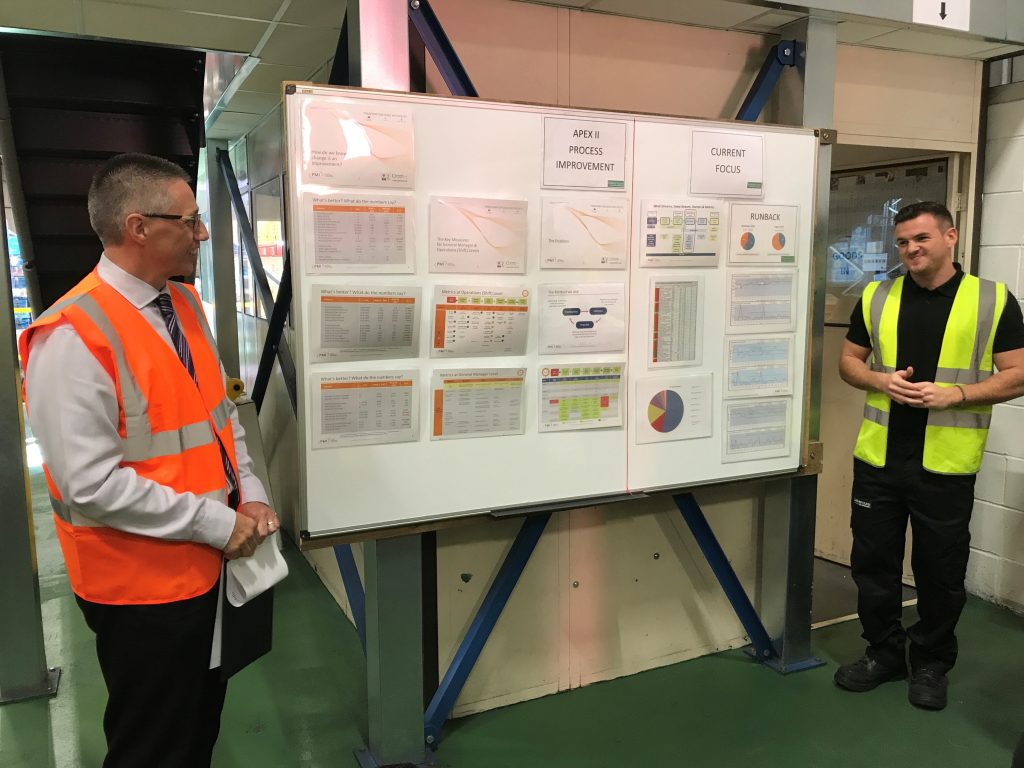 Over 18 months the team overcame significant challenges to accomplish:

The customer had some significant challenges to overcome, not least:

But all this was about to change…

"Once we shifted our focus away from 'saving money' to the way the work was done, the savings and efficiencies came as a result."

VISUALISING THE BUSINESS AS A SYSTEM

Five team members, including the General Manager and his senior operations management team, attended a six day PMI Process Management for Managers in-house course.  It was a big commitment for the team as time out wasn’t always possible.

Understandably for people with many years of logistics experience between them, there was some scepticism about the process improvement methods, and a concern that this would negatively impact on the day job.

This single exercise was the catalyst for further changes, as the team started to appreciate that assumptions had been made about the way in which the work was performed.

The General Manager and his team also mapped out a typical day to find some sense as to where their time was spent, in order to gain control of the work and standardise it, so they could focus on doing the right things at the right time.

Over the next 18 months, the team continued their improvement journey, supported by a dedicated PMI Consultant working alongside the General Manager.  They developed a shared vision and ambition which everyone got behind; ‘Ensure stock is at the right place, at the right time, to the right quality, every time’.

The General Manager, with coaching, addressed the socio-emotional and political aspects, the behavioural ‘things that get in the way’ of the work being done.  He spent time addressing concerns and engaging, listening, and involving the whole team in the changes to enable further improvement.

A 'STANDARDISE, MAINTAIN AND IMPROVE' METHODOLOGY IS EMPLOYED

The Results & benefits the customer achieved

The warehouse is clean, ordered and runs efficiently.  Having multi-skilled people has led to greater operational flexibility – no more standing around or paying for external agencies.  There are clear accountabilities and responsibilities at each of the four process levels, and a discipline of process management and monitoring.  There is a real time awareness of process performance at the right level, so there are no surprises.  Staff are engaged, willing to share their improvement ideas and are proud of what they have achieved.

The customer is now able to:

Would you like to improve the effectiveness of your operations?

Over the last 35 years we have built our business by delivering results for our clients.  All executed by our team of true performance improvement experts, who have held senior roles in industry, sat where you are, and understand the real-world challenges of running a business.  This lets us apply pragmatic solutions to your problems, not just the ‘out of the box’ approach taught in a training course.

Our team get stuck in.  We roll our sleeves up and work with you to deliver your performance improvement goals.  Contact us today and take the first step towards transforming your goals into results.